You are here: Home / Publications / Other 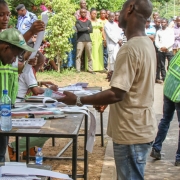 GovInn Research Fellow Prudence Nkomo has published a book review in the journal African Insight, looking at Adebusuyi Isaac Adeniran’s book, Migration and regional integration in West Africa: A borderless ECOWAS. The review was published in the December 2018 edition of the journal.

Although the migration process examined is largely informal, the resulting integration proves that a regionally integrated ECOWAS is feasible – and that it should be people-centric and not state-centric. This is why this book significantly contributes to efforts to understand the role of informal migration in the realisation of a regionally integrated ECOWAS. Academics, policy makers and development workers will benefit greatly from the book and it will be an invaluable resource to policy makers in ECOWAS. 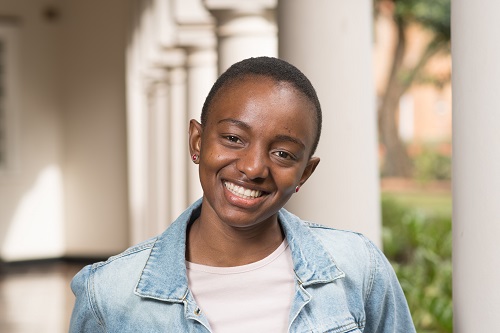 Prudence is currently completing her masters at the University of Pretoria, focusing on trans-frontier conservation areas, local communities, inequality and migration.

To read the full review, visit the Sabinet website.

The Centre for the Study of Governance Innovation (GovInn) and the Economic Commission for Africa (ECA) invite you to the launch of the Economic Report on Africa 2017.

Please find the invitation below, and access the program HERE.

The Centre for the Study of Governance Innovation (GovInn), in cooperation with the German Institute of Global and Area Studies (GIGA), invites submissions for a two-day workshop on the legacy of armed conflicts: Southern African and comparative perspectives.

Achieving stable peace, building accountable state institutions and (re)establishing trust are core challenges in the aftermath of an armed conflict. While violent conflicts are disruptive, they also offer opportunities for political and social change. However, the passage from conflict to sustainable peace is a complicated process. Formal and informal processes taking place during the war and in its immediate aftermath can have profound long-term implications. Even in Southern Africa, which has been heralded as a ‘success story’ of peacebuilding, past wars continue to shape politics and societies in many ways.

More information on this event can be found  here.

SUBMISSION PROCEDURES:
Please register and submit your abstract (200-250 words) at the IGC China 33rd International Geographical Congress website by following the link below. On the Abstract Submission page your “Intended Session” will be listed under Political Geography. Check the “Sociocultural Encounters in Geography: Borders, Borderlands, Grassroots Non-State Actors and the Southern African Integration Project” box and proceed with your submission.

NOTIFICATION OF THE RESULTS OF THE ABSTRACT REVIEW:
16 April 2016

Migration is not new in the Southern African region. Its long history dates back to the late 19th century into the colonial, post-independence and post-Cold War eras, and into the late 1980s and early 1990s when most economies in Southern Africa underwent neoliberal economic reforms and structural adjustments. The economic reforms coincided with the end of apartheid in South Africa. South Africa’s emergence as the economic hub of Southern Africa coupled with the long history of migration across Southern Africa makes South Africa a destination of choice for various categories of migrants including labour, informal traders, medical, education and training, cultural and kinship relations, etc. The post-reform and post-apartheid period has thus witnessed increased immigration into South Africa from Southern and other parts of Africa. The increase in numbers of immigrants in South Africa has created tensions and hostilities directed towards immigrants. The African immigrants in South Africa have thus been constructed as the problematic new comers who take away jobs from South Africans and strain the national socioeconomic infrastructure, pressuring government and limiting its ability to provide essential socioeconomic services and employment to its citizens. This social topography, which has elevated South African citizens and led to the relegation of immigrants to the subaltern, with calls for their evisceration and interpellation, partlyexplains the so-called xenophobia and discourse around xenophobic attacks currently prevalent in South Africa since the early 2000s. While foreigners and agencies such as the United Nations High Commission for Refugees (UNHCR) brand targeted attacks on foreigners and their businesses by South African citizens as xenophobia, South African authorities rather brand such attacks as acts of criminality, or even ‘Afrophobia’, and not xenophobic. Against this background, this session proposes to (a) gain a properunderstanding and conceptualisation of the notion xenophobia and (b) deliberate ways in which social cohesion can be promoted to encourage harmony between foreigners and South African citizens. The dearth of scholarly engagement in academia and policy attention in government circles around regional migration, xenophobia, local integration and social cohesion in Southern Africa makes engaging in this discourse imperative.

SUBMISSION PROCEDURES:
Please register and submit your abstract (200-250 words) at the IGC China 33rd International Geographical Congress website by following the link below. On the Abstract Submission page your “Intended Session” will be listed under Political Geography. Check the “Autochthony, Allochthony and Belonging: Migration, Xenophobia and Social Cohesion in the Southern African Region” box and proceed with your submission.

NOTIFICATION OF THE RESULTS OF THE ABSTRACT REVIEW:
16 April 2016

The University of Leuven is organising the interdisciplinary Master of European Studies: Transnational and Global Perspectives (MAES), as well as the Summer School ‘Europe Inside Out’. MAES’ four specialised modules – ‘European History, Diversity and Culture‘, ‘EU External Relations’, ‘Globalising Europe’ and ‘Europe-Asia’ – allow the students to understand the increasingly complex European and global dynamics.

The MAES program already attract students from 40 countries, including an increasing number of students from Asia and the US, and would be pleased to welcome even more international students. Students may be interested to learn that KU Leuven was very well placed in the Times Higher Education Ranking of 2015/2016, ranked 35th worldwide and 5th on the European continent. During the Master of European Studies in Leuven, students follow courses offered by renowned scholars as well as high-ranking practitioners, including the President of the Court of Justice of the EU, the chief-negotiator of the European Commission in the recent Paris Climate negotiations, and an advisor to one of the Vice-Presidents of the European Commission. Students will furthermore benefit from guest lectures by European politicians, diplomats and officials such as former European Council President Van Rompuy; visits to European and transatlantic institutions in Brussels, Luxembourg and Strasbourg; and cultural excursions to World War I battlefields and the historical medieval cities of Flanders.

More information on the programme can be found on the website: http://ghum.kuleuven.be/ces.

http://governanceinnovation.org/wordpress/wp-content/uploads/2016/02/unnamed.jpg 91 320 GovInn http://governanceinnovation.org/wordpress/wp-content/uploads/2019/06/Govinne-logo.png GovInn2016-02-01 13:39:082016-02-01 13:40:22Call for students: interdisciplinary Master of European Studies: Transnational and Global Perspectives at the University of Leuven in Belgium