Mr. Dickson Ajisafe, GovInn Research Fellow, shared a panel with other speakers, and addressed the audience on “Africa-EU relations: Current development and what Africa should do towards achieving SDGs and 2030 agenda”. In his remarks, Mr. Ajisafe, touched on current development in Africa-EU partnership, significance of goal setting towards development and sustainability, lessons from MDGs and emergence of SDGs. and wrapping-up his session, he hammered on salient attitudes Africa needs to develop as she relates with Europe and responsible actions required of Africa in her pursuit of achieving Sustainable Development Goals and 2030 agenda. 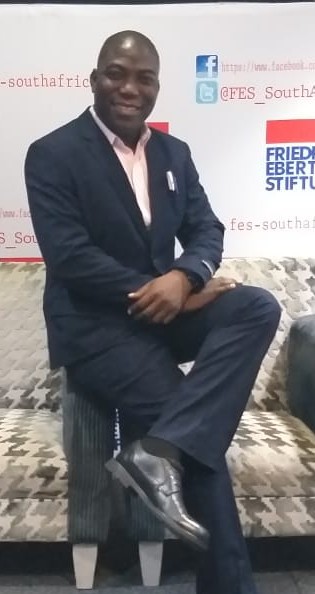 Moderators and speakers at the Conference included Dr. Candice Moore, a Senior Lecturer at the University of KwaZulu-Natal; Ms. Tamara Naidoo, the Programme Manager for International Relations at the Friedrich Ebert Stiftung (FES), South Africa; Hameda Deedat, the acting Executive Director for NALEDI COSATU’s research arm and Sanusha Naidu, Political Analyst and Senior Research Fellow. Others included : Advocate Vasu Gounden, the Founder of the African Centre for the Constructive Resolution of Disputes (ACCORD), Zane Dangor, Special Adviser to the Hon. Minister Lindiwe Sisulu; Prof. Lisa Thompson, the Director of the African Centre for Citizenship and Democracy (ACCEDE), University of the Western Cape, South Africa and others.

Within the conference, a special public dialogue was held which brought together the dominant political parties in South Africa – the ANC, DA, IFP and EFF – to discuss with the public their analysis of key international relations issues affecting South Africa and provide a platform to share their positions. The conference ended with a brief address from Dr. Heinz Bongartz-the Director of FES, South Africa, a group photo and certificate of participation presented to all postgraduate students.

Event Report: ‘Broadening the debate on EU-Africa relations: Towards reciprocal...
Scroll to top