You are here: Home / About Us / Junior researchers / Leon T. Mwamba

Upon completion of his High school in 1994, Mr Leon Tshimpaka Mwamba was curious to understand why the Democratic Republic of Congo, his country of birth, has been characterised by socio-economic disparities despite being coined as “geological scandal” by the Belgian geologist, Jules Cornet in 1892. 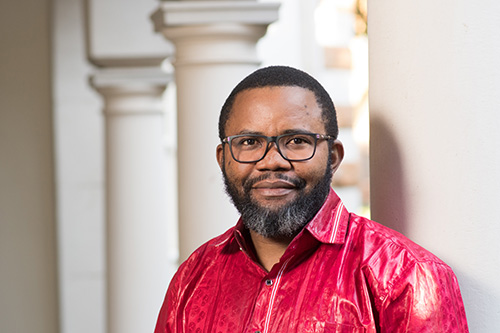 This paradox has motivated Mr Tshimpaka to embark into Political and Development Studies as his keen interests. Before joining Govinn as Junior Researcher in 2016, Mr Tshimpaka completed his five years program of Honours degree (Licence) in Political and Administrative sciences from the University of Lubumbashi/DR Congo in 2001. Survivor of recurring political turmoil in the DR Congo, Mr Tshimpaka was forced to migrate to South Africa in 2003.

After years of hardship as forced migrant in South Africa, Mr Tshimpaka did not give up on his dreams and managed to enroll for his Masters of Arts in Development Studies in 2011 after successfully completing his Non-purpose degree in Human Security and Development, Development Contemporary issues and Debates from the University of South Africa in 2010.

In addition, MR Tshimpaka is an external marker for the same above Academic Department for the past five years since 2011, marking the all undergraduate modules. He worked as Protocol Official for the Angolan Embassy Defence Office in Pretoria for the past 7 years. Mr Tshimpaka is currently reading towards a PhD in Political Sciences at University of Pretoria that focuses on “Social transformation through people-centred approaches: a critical analysis of the Southern Africa People’s Solidarity Network”.

“How Africa can up its game to meet environmental challenges”, The...
Scroll to top