For many years, South Africa had represented a typical example of a hydrocracy. Following the democratic transition in South Africa, however, new policy paradigms emerged, supported by new political elites from the ANC. A reform of the water policy was one of the priorities of the new Government, but with little experience in water management, they largely relied on ‘international best practices’ in the water sector, although some of these international principles did not perfectly fit the South African water sector landscape. In parallel, a reform called ‘transformation’ took place across all public organisations with the aim of allowing public administrations to better reflect the racial components in South African society. As a result, civil engineers lost most of their power within the Department of Water Affairs and Sanitation (DWS). However, despite these changes, demand-side management has had difficulties in materializing on the ground. The paper aims at discussing the resilience of supply-side management within the Ministry, despite its new policy orientation. Using a policy network concept, the paper shows that the supply-side approach still prevails today, due to the outsourcing of most DWS tasks to consulting firms with whom DWS engineers have nourished a privileged relationship since the 1980s. The article uses the decision-making process around the Lesotho Highlands Water Project (LHWP) Phase 2 as an emblematic case study to illustrate such developments. This policy network, which has enjoyed so much influence over DWS policies and daily activities, is now being contested. As a consequence, we argue that the fate of the LHWP Phase 2 is ultimately linked to a competition between this policy network and a political one. 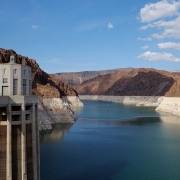 'Managing or governing water resources? Real-time model and the management of the scarcity on the Crocodile River…

'Cape Town should serve as a wake up call for managing water in South Africa', by Magalie…

'Expert assessment as a framing exercise: The controversy over green macroalgal blooms’ proliferation in France', by Magalie…

‘Migration and resilience of rural households’ livelihoods in the face...