You are here: Home / Publications / News / In the Media / “Africa remains a target as Global South ‘land rush’ moves to production” The ... 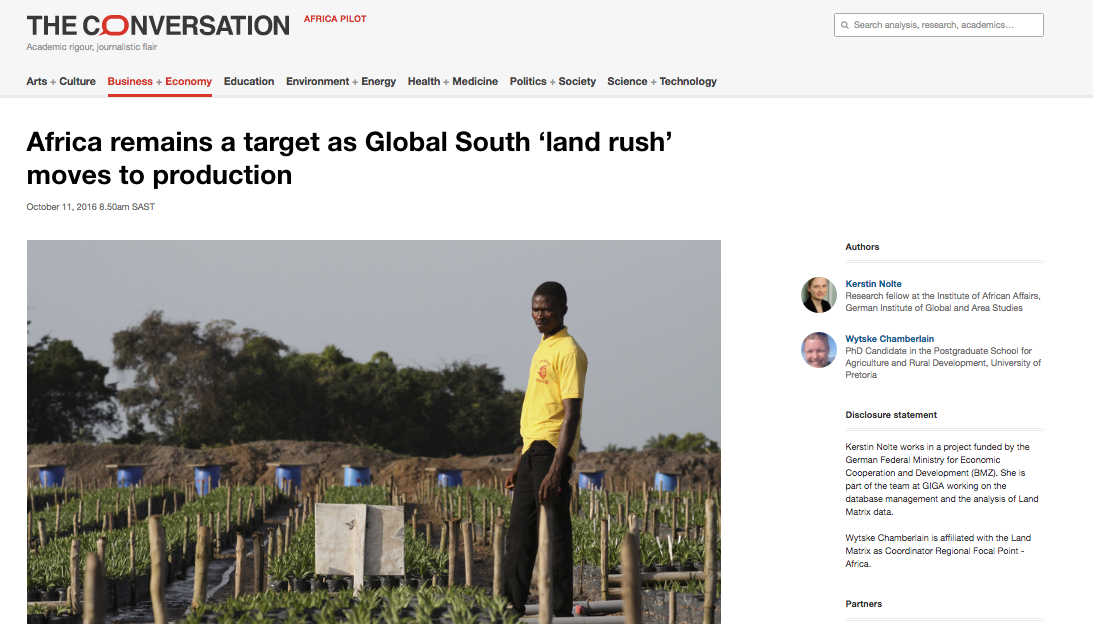 A man stands by seedlings at the Sierra Leone plantation of Lichtenstein-based firm, Socfin. ReutersIn 2007, a spike in commodity prices triggered a sudden increase in demand for agricultural land across the world.
It was believed that commercial investors in the Global North speculated on a rise in land and commodity prices. And governments aimed to ensure food security without dependence on the volatile world commodity market by buying up land, largely in the Global South.

The Land Matrix Initiative aims to shine some light in the deals by providing open access to information on intended, concluded, and failed land acquisitions that have taken place since the year 2000. Over recent years, both the quality and the quantity of the data have improved considerably.

This led us to take a fresh look at the current trends in international large-scale land acquisitions.

The start of production

The Land Matrix records more than 1,000 deals covering 26.7 million hectares of contracted land, equal to about 2% of the arable land on Earth.

Most of these deals cultivate pure food crops, and crops that have multiple uses, such as oil seeds. Palm oil is the single most important crop driving large-scale land acquisitions.

One of the most striking things we found about land deals is their increasing rate of implementation. While speculation was discussed as one of the main drivers of the “rush for land” in earlier years, our data indicates that about 70% of the deals have now started activities on the ground.

Compared to previous figures published in 2012, the number of operational projects has almost doubled. For most deals, it takes less than three years to enter the production phase.

For a subset of deals – 330 out of 1000 – we are familiar with the area under production. This means we are able to look into the implementation of these deals over recent years.

Africa remains the most important target area of land acquisitions, with deals concluded in many countries across the continent.

Africa accounts for 42% of the deals, and 10 million hectares of land. Land acquisitions are concentrated along important rivers such as the Niger and the Senegal rivers, and in East Africa.

The second most important region is Eastern Europe, mostly due to the large average size of land per deal: 96 deals covering 5.1 million hectares of concluded deals. One single deal in Ukraine by the company UkrLandFarming covers an area of 654,000 hectares alone.

Another emerging trend is that investors from the Global South have gained in importance. Malaysia is now the leading investor country, with Singapore at number four (the USA and UK are second and third). Global South investors show a strong preference for investment in their own region.

Most investors are still based in Western Europe, and their interests in 315 concluded deals cover nearly 7.3 million hectares. Private sector investors account for more than 70% of the concluded deals. So we know that governments are not the main driver of large-scale land acquisitions.

But investors are part of complex chains, which often include state-owned entities. This means the indirect impact of governments through these entities, and also through policy and trade agreements, is likely bigger than what we can see in the data.

We find that land acquisitions take place in relatively highly populated areas, dominated by existing croplands. About one-third of the area acquired was formerly used for smallholder agriculture – implying an increasing competition over land use between investors and local communities.

We will only see the full impact of the deals in years to come. Positive impacts of large-scale land acquisitions generally include more local jobs and better access to infrastructure. On the negative side, loss of access to land and natural resources, increased conflict over livelihoods and greater inequality are frequent issues.

Given their increasing rate of implementation, the topic of land acquisitions remains hugely important, with many deals entering the production stages for the first time. The fact that land deals often target areas that have been used before hints at considerable socioeconomic and environmental implications for the target regions. And the more we know about these deals, the better we can understand how they will affect local people.

Water shortages about to put load-shedding in the dark - Business Day 05.05.2015

"How numbers rule the world" at Free University, Berlin

EVENT “International Land Deals for Agriculture: Fresh insight from the...

ESA-SSA IN GERMANY
Scroll to top