You are here: Home / Publications / News / In the Media / Event Report: ‘Broadening the debate on EU-Africa relations: Towards r... 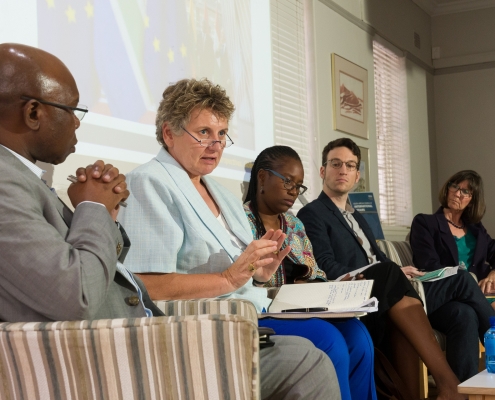 Authors and editors of the Special Issue discuss how African agency changes the relationship between the EU and the continent.

On 26 February, researchers and practitioners convened at the University of Pretoria to celebrate the launch of the South African Journal of International Affairs (SAJIA) Special Issue on “Broadening the debate on EU-Africa relations: Towards reciprocal approaches”, guest edited by GovInn research fellows Dr John Kotsopoulos and Dr Frank Mattheis.

The Centre for the Study of Governance Innovation (GovInn), the European Union Delegation to South Africa and the South African Institute of International Affairs (SAIIA) jointly invited the academic and policy communities to debate the results of the Special Issue as well as the current state and future prospects of the relations between the European Union and Africa. SAJIA editor Dr Martha Bridgman and the Special Issue’s guest co-editor Dr Frank Mattheis moderated the launch and shared with the audience how the Issue had come to life. They underlined that a recalibration between African and European perspectives is crucial and that the EU-Africa relationship should not be understood as unidirectional but rather in terms of mutual influence.

Three authors (Prof Jo-Ansie van Wyk, UNISA; Prof John Mugabe, UP; Dr Petronella Chaminuka, Agricultural Research Council) presented insights from their articles, ranging from the repercussions of sanctions against African politicians on EU-Africa summitry to the obstacles surrounding joint EU-African agricultural governance initiatives. The packed room of over forty diplomats, policy makers and researchers engaged the panelists on pertinent issues such as challenges of joint knowledge production and the asymmetry in the relationship. In his closing remarks, Mr Raul de Luzenberger, Deputy Head at the EU Delegation to South Africa, offered a prospect of not only increasingly shared concerns between the EU and Africa but also a realization that the prosperity and security of both regions are intrinsically linked. The event concluded with a reception, generously sponsored by the EU Delegation to South Africa. 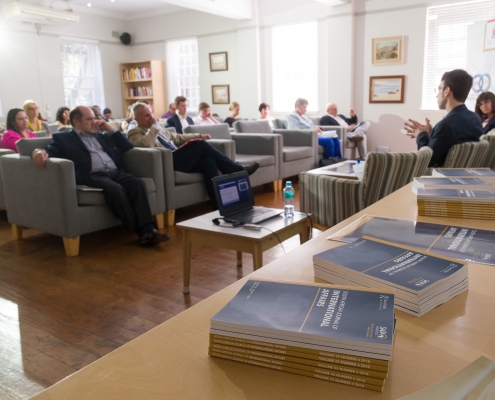 Hot off the press: Copies of the South African Journal of International Affairs Special Issue.

The publication of the Special Issue marks the end of a two-year Jean Monnet Project on “EU-Africa Relations in a Changing Global Order” (ERGO), carried out by GovInn and the European Studies Association of Sub-Saharan Africa (ESA-SSA), and co-funded by the European Commission’s Erasmus+ programme. In July and December 2017, GovInn had hosted two author workshops and a policy conference on EU-Africa relations, privileging the representation of African perspectives and bringing together thirty researchers from all corners of the continent. The project successfully pitched the idea of a special issue to SAJIA and worked with selected authors towards submission, peer review and eventually publication.

The Special Issue includes eight academic articles covering both European and African perspectives plus six reviews of recent books dealing with EU-Africa relations. It can be downloaded online at https://www.tandfonline.com/toc/rsaj20/25/4?nav=tocList. Information about ESA-SSA and how to become a member can be found at http://governanceinnovation.org/esa-ssa/.