You are here: Home / About Us / Directors / ‘Of Borders and Fortresses: Attitudes Towards Immigrants from the...

GovInn’s Co-Director Chris Nshimbi published together with Inocent Moyo the article ‘Of Borders and Fortresses: Attitudes Towards Immigrants from the SADC Region in South Africa as a Critical Factor in the Integration of Southern Africa‘ in the Journal of Borderlands Studies.

South Africa attracts migrants from other parts of Africa, Asia, Europe, Australia and the Americas. However, the immigration debate within the country apparently revolves around immigrants from the other parts of Africa, including the Southern African Development Community (SADC) region, and projects them as undesirable in a way best interpreted as discriminatory and exclusionary. This paper argues that this, coupled with South Africa’s immigration legislation, policies and practices amounts to forms of bordering and exclusion that starkly contradict the country and its neighbor’s aspirations for a regionally integrated Southern Africa. As one of the few SADC member states that have ratified the 2005 Draft Protocol on the Facilitation of Movement of Persons in the SADC, immigrants and cross-border movers from the SADC region ought to be treated well in South Africa. Not doing so militates against the goal of an integrated Southern Africa and the commitments South Africa has made to the continental agenda of establishing an African Economic Community.

'Foresight for all: Co-elaborative scenario building and empowerment', by Robin Bourgeois et al in Technological Forecasting and… 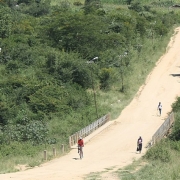 Chris Nshimbi at Channel Africa on the East African Commission, 11.11.2017

Policy Brief: ‘The end of the global transitional justice project: What...
Scroll to top