You are here: Home / Publications / Papers / Policy Coherence for Development in the European Union: Do New Procedures...

Camilla Adelle has written an article with Andrew Jordan of the Tyndall Centre for Climate Research on how the EU is struggling to coordinate its policies so that they do not undermine its own international development objectives.

Abstract: Policy coherence for development (PCD) — the integration of the needs of developing countries into all policy areas — is now an EU policy goal. This article focuses on how far this ambitious goal has been addressed in a policy procedure — impact assessment (IA) — established to support such cross-cutting goals. Drawing on an analysis of the 2006 and 2013 reforms of the EU’s sugar policy, it finds that while IA offered a new venue in which to debate PCD, in practice it reproduced the same disagreements that previously frustrated agricultural reform. The article shows how IA was shaped during its implementation, so instead of functioning as a bureau- cratic procedure to pursue policy coherence, it simply buttressed the power of domi- nant groups. Advocates of policy coherence in general and PCD in particular should therefore be mindful that the toolbox of implementing instruments in the EU may be more limited than sometimes assumed.

Read the full paper in the Journal of European Integration

“Sport, Security and Language in African and European perspectives” 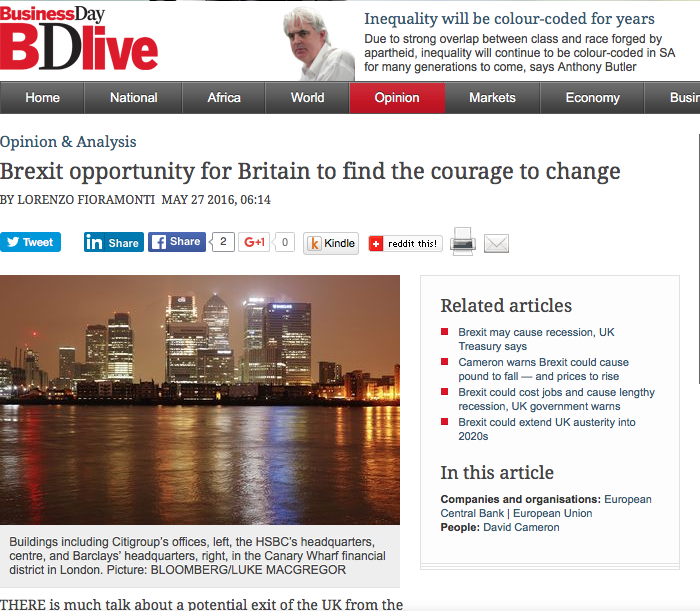 Life in the Fringes: Economic and Sociocultural Practices in the Zambia–Malawi–Mozambique Borderlands in Comparative Perspective

'Brexit opportunity for Britain to find the courage to change', Business Day 27.05.2016

Contexualising the tool development process through a knowledge brokering approach:...
Scroll to top