You are here: Home / Xenophobia

GovInn’s Co-Director Chris Nshimbi published together with Innocent Moyo and Trynos Gumbo the chapter ‘Between Neoliberal Orthodoxy and Securitisation: Prospects and Challenges for a Borderless Southern African Community’ in the Springer book Crisis, Identity and Migration in Post-Colonial Southern Africa. 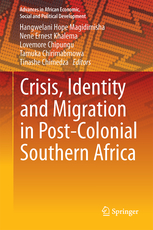 This contribution considers the possibility of a borderless Southern Africa—under the auspices of the Southern African Development Community (SADC). This is done against the realities and understandings of migration and contested notions of citizenship and development in Southern Africa. A thorough review of legislative and policy frameworks of different types of migration at the regional and national levels in Southern Africa was conducted. Primary data were obtained through personal interviews with policy-makers, migrants and other non-state actors whilst participant observations were also conducted at border posts, government immigration offices and refugee application centres. The chapter proffers that Southern Africa is characterised by open borders, with substantial formal and informal cross-border movements that have political and socio-economic costs. However, the most preferred destinations by migrants in the region have systematically opposed the establishment of a formal free-movement-of-people regime across the region for over 20 years. Still, regional legislation and the realities of formal and informal movement across national borders in the SADC region show the necessity for member states to establish a migration management regime devoid of borders. This, however, will have to be carefully crafted, fully considering the region’s history and the challenges associated with migration.

GovInn’s Co-Director Chris Nshimbi published together with Innocent Moyo and Trynos Gumbo the chapter ‘Migration, Logics of Inclusion and Exclusion and Xenophobia: The Case of African Migrants in Post-apartheid South Africa‘ in the Springer book Crisis, Identity and Migration in Post-Colonial Southern Africa.

This contribution explores xenophobic tendencies in post-apartheid South Africa through historical sketches that revolve around debates of belonging, inclusion and exclusion. Such a historicity has created a legacy of suspicion and stigmatisation of migrants from within and without the country resulting in a fractured society with some implicit or explicit ‘othering’ on the basis of suspicion and fear. This has provided a template for exclusion of African migrants through promotion of indigeneity and/or reconfiguration of an exclusivist South African identity, which relegates migrants from other African countries to the subaltern, second and third classiness—a site for xenophobia. On the other hand, South African authorities are faced with a dilemma: they find it difficult to acknowledge the reality of xenophobic hostilities. Doing so would force them to accept that an underlying and continuing exclusivist narrative exists. If xenophobia contributes to the promotion of an exclusive South African identity, we question the approaches that have been adopted to try and resolve the xenophobic challenge and argue that the first real step towards dealing with xenophobia does not rest in denouncing it. Rather, the solution lies in engaging and investing in concerted efforts that ‘clean up’ the image of the African migrant.